Across East Anglia the river Waveney forms the Norfolk-Suffolk border for much of its length.

On a recent tour with members of The Guild of Food Writers, Petty Elliott discovered the pleasures of this region’s delightful artisanal food and wine.

Mention of Norfolk brought back vivid memories of lavender, fresh crab and the famous ‘Broads’. After 16 years away in Indonesia, I could just recall Suffolk’s refreshing beer and cider, some wonderful seafood and of course great painters, Constable and Gainsborough. Starting point for the two day tour was Diss station, two hours from London and one from Cambridge and as twelve us gathered, I was eager to discover more.

First stop was Fen Farm Dairy to try some Baron Bigod Brie-de-Meaux cheeses. Carrying on the traditions of a three generation-owned farm, Jonny and Dulcie Crickmore made a move into cheese production just three years ago Their choice? Cheese from rich, unpasteurised milk produced by a very healthy herd of Montbeliard cows brought over from France. The result is superb flavour, aroma, texture and sheer deliciousness in a raw milk brie. Also on offer is raw cultured butter and buttermilk with Icelandic-style ‘skyr’ yoghurt planned for later this year. 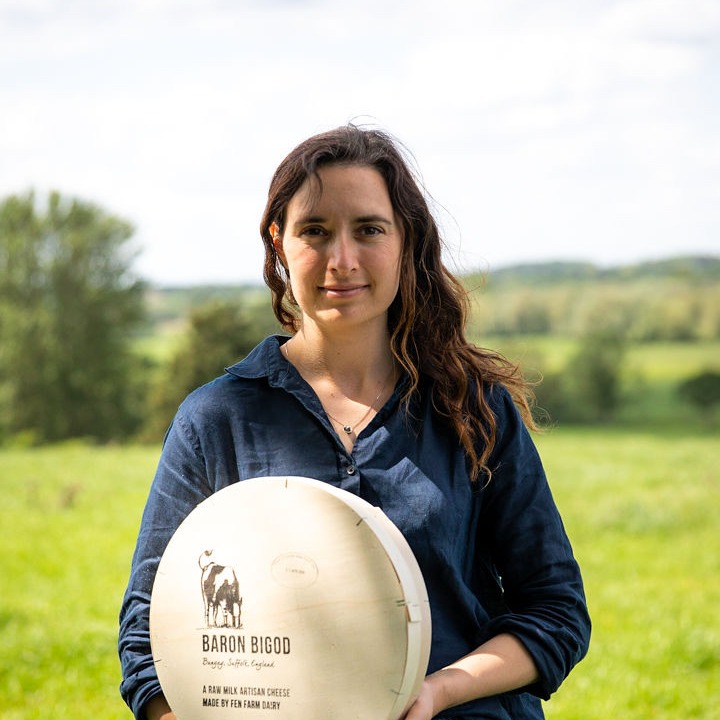 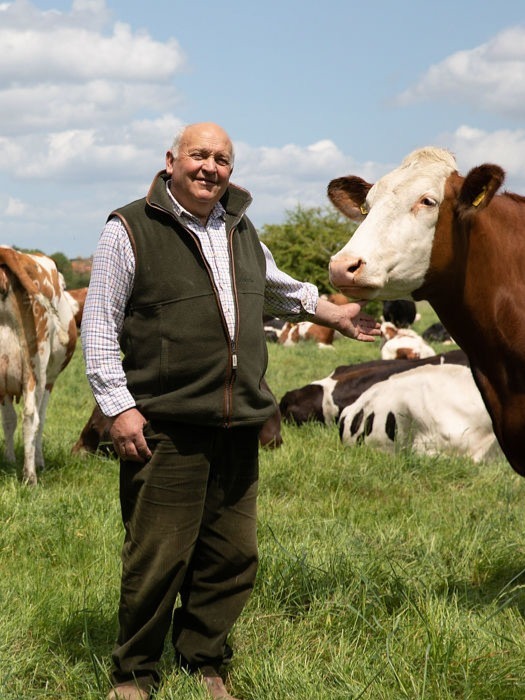 Fen Farm Dairy has built a stunning reputation and a high profile – their produce being served at Prince Harry’s pre-wedding breakfast, no less. Last June their Bungay Raw Butter won a Super Gold award (best of the best butter in France) at the Mondial du Fromage show in Loire. And Fen Farm Dairy has become the first establishment to provide milk dispensers – bring your own sterilised containers and fill up when you visit.

The tour of the farm included a privileged peek inside the cheese factory and a sumptuous picnic of Fen Farm cheese, local artisanal jam, pickles, bread, a house salad and needless to say, a glass of wine. This was perfection – a view across the water meadows of the Waveney Valley under a vivid blue sky dotted with fat clouds.

Our second stop was to meet William Hudson and Josiah Meldrum in, of all places, a field. Together they are Hodmedod’s: award-winning purveyors of British pulses, grains and seeds. Working closely with British farmers they focus on organic, sustainable production methods to bring back specialities such as black badger peas and fava beans. Such delights have grown in Britain since the Iron Age but are almost forgotten today. The significance of the field soon became clear as several different crops were being grown alongside each other, lined by trees. This concept enhancing biodiversity, improving soil quality and contributing to water conservation, makes Wakelyns Farm an inspiration and a great partnership for Hodmedod’s. As I learned more of this fascinating approach, I was reminded of Javara, a social enterprise with whom I collaborate in Indonesia. The two operations are so different and thousands of miles apart but they share a passion for revitalising unloved but nutritious ingredients.

Among several discoveries that day I was surprised to see quinoa among Hodmedod foods - something I associated with South America rather than East Anglia. The range includes roasted pulse snacks, gluten free flour and canned pulses available through selected distributors, not big chain supermarkets. Order online after a visit to www.hodmedods.co.uk

This splendid medieval estate was built in1478 by Sir James Hobart, Attorney General to King Henry VII. Wonderfully maintained today, it offers luxurious accommodation, exquisite formal gardens and an impressive kitchen, full of character. The large barn is particularly impressive and memorable venue for weddings and parties. After touring of the property and time to freshen up, we met for pre-dinner drinks, a selection of delicious beverages provided by Adnams, brewer, wine merchant and spirits producer www.adnams.co.uk

A perfect table setting in classic décor greeted us for dinner. We started with a choice of salads, fresh herbs, smoked quinoa, and condiments such as local artisanal vinegar from @aspallvinegar.

Utterly delicious flaky, light crusted game pies packed with venison and rabbit were provided by @truly traceable. More extra mouth-watering dishes were to follow, including dessert. The dinner was so enjoyable, I must admit to retiring early to my room for a deep sleep.

After some artisanal bread baked by @pennybunbakehouse for breakfast using Hodmedod’s wheat flour and accompanied by curd from @scarlettandmustard, we headed to Flint Vineyard.

Owners Ben and Hannah Witchell made it a mission to find the driest and sunniest part of East Anglia in order to realise their winemaking dreams. An email to tap the local knowledge of farmer Adrian Hipwell proved fortunate, as it led to a partnership, and Flint Vineyard was born. Five wines are in production; a red, two whites, a rosé and a sparkling rosé. The ‘Charmat’ sparkling rosé uses the preferred method of fermentation in the tank rather than in bottle. Flint has an impressive number of accolades. Their ‘Bacchus’ wine has been credited by both the Independent and The Times newspapers and their Silex Blanc 2018 gained a bronze at the National Competition of British Wines. I will need little excuse to re-stock soon. To learn more about these passionate winemakers and to order online visit: www.flintvineyard.com

Jacky Kennedy, owner of Marshpig provided some fascinating insights on how she has evolved her range of produce so be so distinctive. I found the lower levels of fat in these products evoked what I can only describe as a 'clean' taste, loads of flavour, yet little fatty aftertaste. It did not come as much of a surprise to discover her hand-made produce from free range pigs and rare breeds has won a number of awards. I particularly enjoyed the fennel salami, chorizo and Bresaola with 15% less fat. Visit: www.marshpig.co.uk

The Fox and Goose, Fressingfield 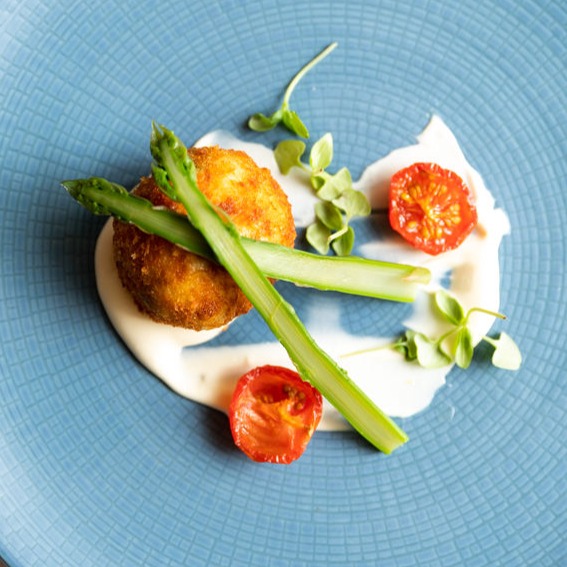 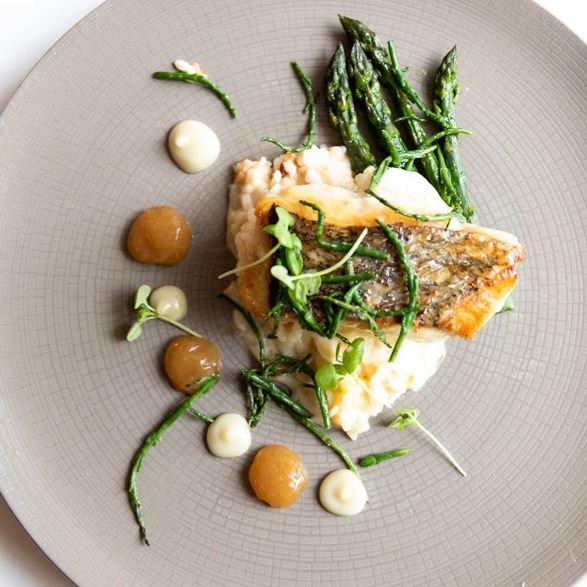 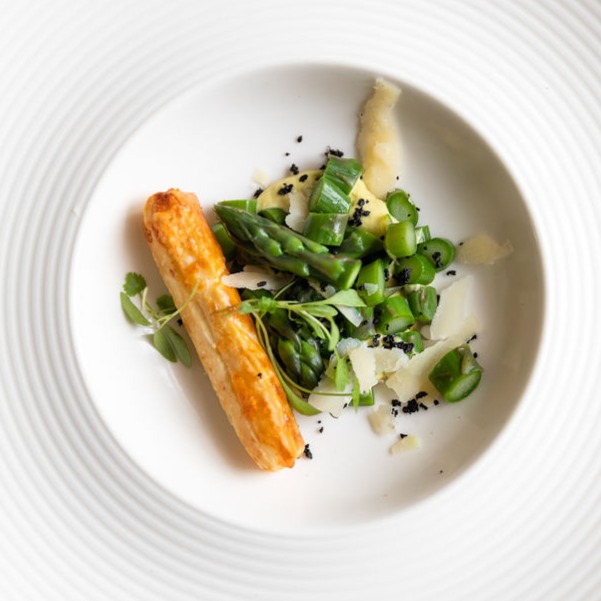 Ending the tour in this gourmet pub, a former guildhall, was sheer pleasure. Confronted with nine choices for a three-course lunch celebrating modern local cuisine proved more difficult than I expected. I wanted to try them all. To start I settled on asparagus with a parmesan wafer, asparagus mayo and coriander. This was followed by fillet of hake with a smoked salmon and apple risotto, asparagus, lemon grass, samphire and burnt lemon jelly. And to close this feast, elderflower cheesecake with blueberries and gooseberry sorbet was both refreshing and decadent.

The memorable tour was sadly over. Huge thanks to Linda Duffin https://mrsportlyskitchen.com for organising, and to our many hosts who made every encounter so very special. It had been not only the pleasure of great food, but a chance to share the passion and knowledge of such talented food producers, chefs, hosts and artisans, their stories and all in a wonderful setting.

Banda: the home of Nutmeg